“Art is not subject to political games; its importance elevates it above any racial difference. All men of talent, of noble spirit, can make it.” 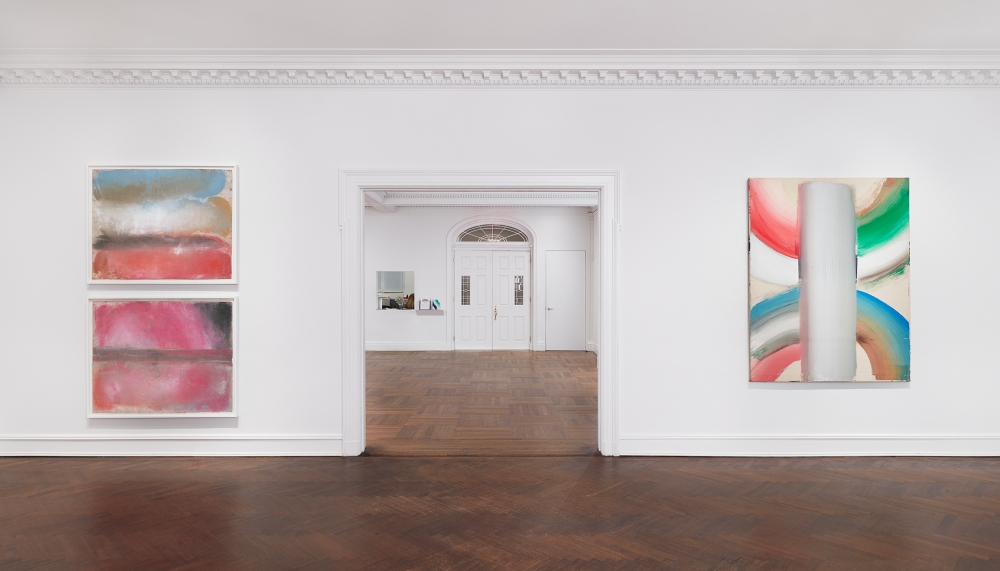 Ed Clark (1926-2019) is best known as a pioneer of new artistic methods and modes of presentation. At the forefront of these innovations is his groundbreaking use of the push broom instead of a traditional artist's brush and his decision to work with the shaped canvas, becoming the first person in the United States to exhibit such a work in 1957 at the Brata Gallery. These two advances undoubtedly changed the course of abstraction on a grand scale, yet they tend to eclipse the other influences and progressions that exist within Clark's oeuvre. In a career that expanded over six decades, Clark consistently pursued other methods in addition to those already mentioned, which would allow him to capture the colors, events, and places that inspired him.

Spatial Image XII  (1981) was made with dry pigment, a preferred material for Clark's works on paper. Again forgoing a conventional brush, Clark would work the dry pigment onto the paper using the palm of his hand, spreading it across the support with an energy that echoes his push broom paintings. The choice of material was inspired by the traditional sand paintings of the Pueblo tribe, which he first learned of during a stint in Taos, New Mexico. These artworks would be made by trickling small quantities of crushed, colored stone onto a background of clean, smoothed sand and were customarily made in conjunction with religious healing ceremonies. Paper as both a support and an independent material has likewise played an essential part in Clark's progression. Not only did he create works on paper during his travels for paper's cost-effectiveness and portability, but his first shaped canvases came about when he used paper collage on top of a rectangular canvas to make it appear more angular. 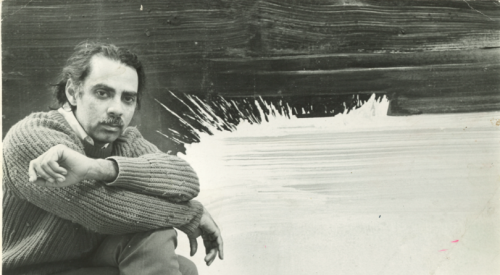 Ed Clark in his studio. Photographer unknown. Artwork © The Estate of Ed Clark

For Clark, traveling was one of the primary means to gather inspiration and renew his practice. Just as the dry pigment is derived from his experiences in Taos and the American Southwest, the colors of Spatial Image XII can trace their lineage to a trip Clark took at that time. During 1980 and 1981, Clark toured the Caribbean island of Martinique, and the soft blues of the left-hand side of the composition fade into the earthier beiges and greens like water rolling onto a sandy beach. The importance Clark placed on traveling began in 1971, in an oft-told story of his visit to Crete to stay with the artist Jack Whitten, who had a residence on the island. Upon his return, Clark realized that the colors used in the works he made there would have never come to him had he tried to paint the same picture in his home cities of New York or Paris. Subsequently, Clark began traveling across the world, including Nigeria, Bahia, and the aforementioned stay in Taos, New Mexico. These experiences with other cultures and landscapes came to be a defining part of Clark’s work, of which Spatial Image XII stands as an exemplary testimony.

“Ed Clark is like a sponge, absorbing every drop of life’s experiences and processing them unconsciously into art. He goes on frequent working trips to distant, often exotic places to experience new sensations of light, atmosphere, and material substance. Clark knows that without doing it purposely, his work will look different, feel different, and sometimes even be made by a different method as a result.”